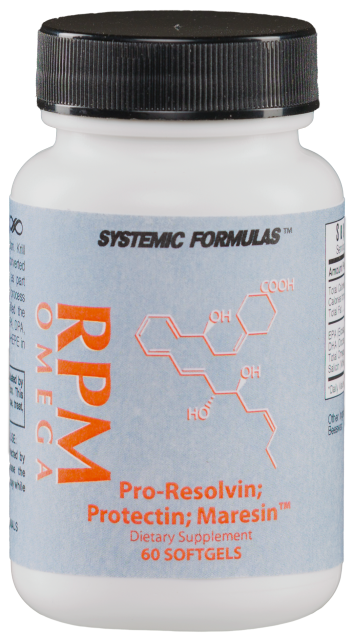 RPM Omega krill oil is a ground-breaking formulation. Krill DHA, EPA, 17-HDHA and 18_HEPE are converted into Resolvins, Protectins and Maresins as part of our body's ability to resolve the normal process of inflammation. Our research has identified the following pro-resolving compounds DHA, EPA, DPA, 17-HDHA, 18-HEPE, 12-HEPE, 5-HEPE, 8-HEPE in our krill oil.

In the 21st Century, many people suffer from chronic immunological inflammation (cited by Time Magazine, 2/2004 as the “silent killer”)— a condition where the body’s normal inflammation processes are initiated, but stay turned on and do not evolve into the resolution phase. This means that the body’s innate immune system works overtime compared to its adaptive immune system. Science has identified that certain polyunsaturated (PUFA) molecules called EPA and DHA are required to provide active metabolites—Resolvins, Protectins, Maresins—used when the body determines that the initiating phase of inflammation is fulfilled, and the Resolution Phase can begin. Thus inflammation does not simply vanish, it must first actively resolve. Scientific research points to the fact that the human diet requires more pro-resolving molecules to keep up with the demands of the current environment. RPM Omega is formulated to provide the body nutritional EPA/DHA, plus synergistic White Willow Extract to support the resolving phase of the natural inflammation activities